I’m at a frustrating point between projects. None of the UFFOs are getting finished, and nothing new is really coalescing. I have one dishcloth on the needles that I actually had to frog and restart. I’m not a completely perfectionist knitter, but I try not to leave mistakes that I am aware of or make really obvious fudges. However, my tolerance of dishcloth errors is pretty high, particularly in this case: I don’t love the yarn, so I’m not going to gift it to anyone. I just want it to be knitted into a functional item. But, when tightening the grafting on the two edges, I must have pulled on a YO instead of on the graft. The whole thing got completely out of whack, and I ended up just pulling it out. In retrospect, I realize what I must have done. One mod I made to the Cherry Pie Washcloth pattern was to use a crochet chain cast on. Well, I usually would knit the first row after the cast on to make sure there was a solid row of stitches to work off, but I must have forgotten that this time. I restarted it yesterday and hopefully this time it will go better! 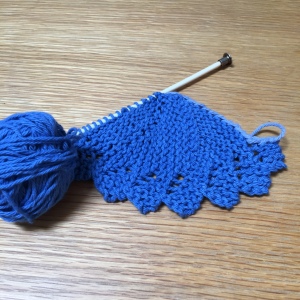 One cool thing about restarting it yesterday was that I remembered the cast on without having to look it up, and was able to knock it out really quickly. Also, I’m attempting a Russian join for the first time. Since I’m not giving the dishcloth away, I’ll be able to see how well it wears over time.

I cast off Quicksilver the other day, but haven’t started weaving in ends yet. I want to do further research on that before I start. It may sound silly–I’ve woven in hundreds of ends on many different types of fibers–but I realized I don’t think I’ve woven in sock weight merino superwash ends before, and certainly not on a project of this scope. I really want it to be a completely secure and invisible finishing job, so I want to learn a little more about it. Basically, part of me just doesn’t believe that superwash ends will stay where I put them! 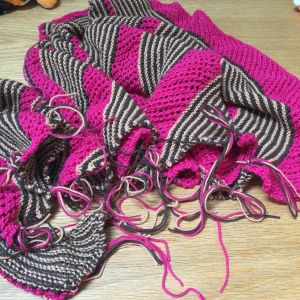 I started sewing in the ends for my Old Shale blanket, but that is proving to be a monumental undertaking. I should probably put some time in on that.

I cast on for a new project last night, but I am going to pull it out. I’ve had my eye on Rivulet for a while and I have enough Noro Haniwa in my stash to make the medium width. So, I cast on 56 stitches and worked a few rows in 1×1 rib. For this pattern, ALL stitches are worked through the back loops. For knit stitches, no big deal–doesn’t take but an instant longer than a regular knit stitch. But for purl stitches? That was taking forever. I stuck with it for four or five rows, though, then started looking at the work with a more realistic eye. I didn’t swatch because typically a scarf’s gauge isn’t all that crucial. In this case, a scarf that was supposed to be about 8″ wide was easily 12″ and could stretch to 14″ in a pinch. So, I will be pulling that out and rethinking. It would probably look lovely, but would be out of proportion and I would run out of yarn at about 3′ long! 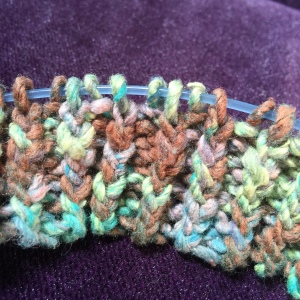 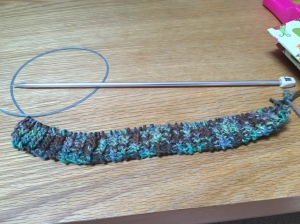 A 14″ needle is included for scale! 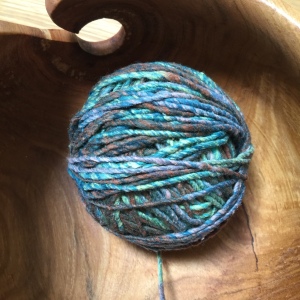 The yarn is so pretty. I can’t get the greens to show up right in the pics. they actually have a much more emerald shade.

I would still like to make that scarf, but don’t have the yardage required in another yarn. I don’t think it’s reasonable to go down several needle sizes to get gauge and still use the Haniwa–the fabric would end up being way too dense. That yarn was not meant to be crowded like that. I have another reversible cable scarf pattern that also calls for aran weight yarn, so I may try that. It’s the His/Hers Reversible Scarf in Cables Untangled: An Exploration of Cable Knitting by Melissa Leapman. I’ve used that pattern before and really liked it. If that doesn’t work out, I will have to go back to the drawing board completely. Or, I could start my test knit!

I do have one other thing percolating, but I don’t have the right yarn in my stash to start yet. I won a free pattern from Melanie Berg a couple of days ago (she designed the Quicksilver shawl). I posted on the weekly topic thread and got chosen at random! I chose Drachenfels, a pattern I had my eye on anyway. Pretty cool, right?