I have plenty of WIPs, but what I want to share with you today is an FO that I’m really excited about. So, over the summer I started knitting again after a bit of a hiatus, and it quickly became my best form of therapy. I started doing projects that pushed me as a knitter and this was really the first of those. I finished the knitting almost two months ago but didn’t get around to weaving in ends and blocking until recently.

Without further ado, here is my completed Quicksilver: 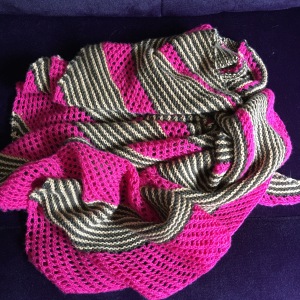 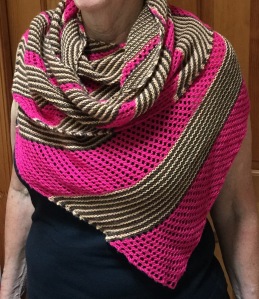 Many thanks to my mom for her excellent modelling services!

I LOVE this project. It’s for the wifey, but I hope she won’t mind if I borrow it from time to time! I followed the pattern as written. I would definitely make this again. I like the yarn all right, but it’s not my absolute favorite as it’s just a little splitty. I was worried initially that it wouldn’t be big enough but it grew a lot with blocking–from about 30″ x 53″ to about 38″ by 65″, even though I didn’t block it super aggressively.

The pattern was a little challenging at first but once I got into it, it was very straightforward. The only really tricky bit was keeping track of where to turn around for the short rows (in the mesh sections). I started using a stitch marker pretty early on and that solved that problem. It knits up quickly and, despite having a lot of garter stitch, isn’t too monotonous since the mesh panels break it up a little.

Overall, this was a great project!