I’m guessing at least one or two people will get the movie reference from the title. It’s one of my very favorites–plenty of interesting historical textiles to look at, great one liners, an abundance of proper English restraint, and it’s long enough to accomplish some serious knitting while watching. In any case, I quoted it because my knitting endeavors over the past couple of days have revolved around hearts and love.

First off, I cast on for a project I’ve been planning for a little while. To be exact, since the last time my mom was in town. We were discussing a certain thrift store yarn find we had made together and I realized that I had a pattern that would suit it. The yarn is Rowan Kidsilk Haze, of which I found over two and a half skeins in a brilliant purple shade named “splendour”. 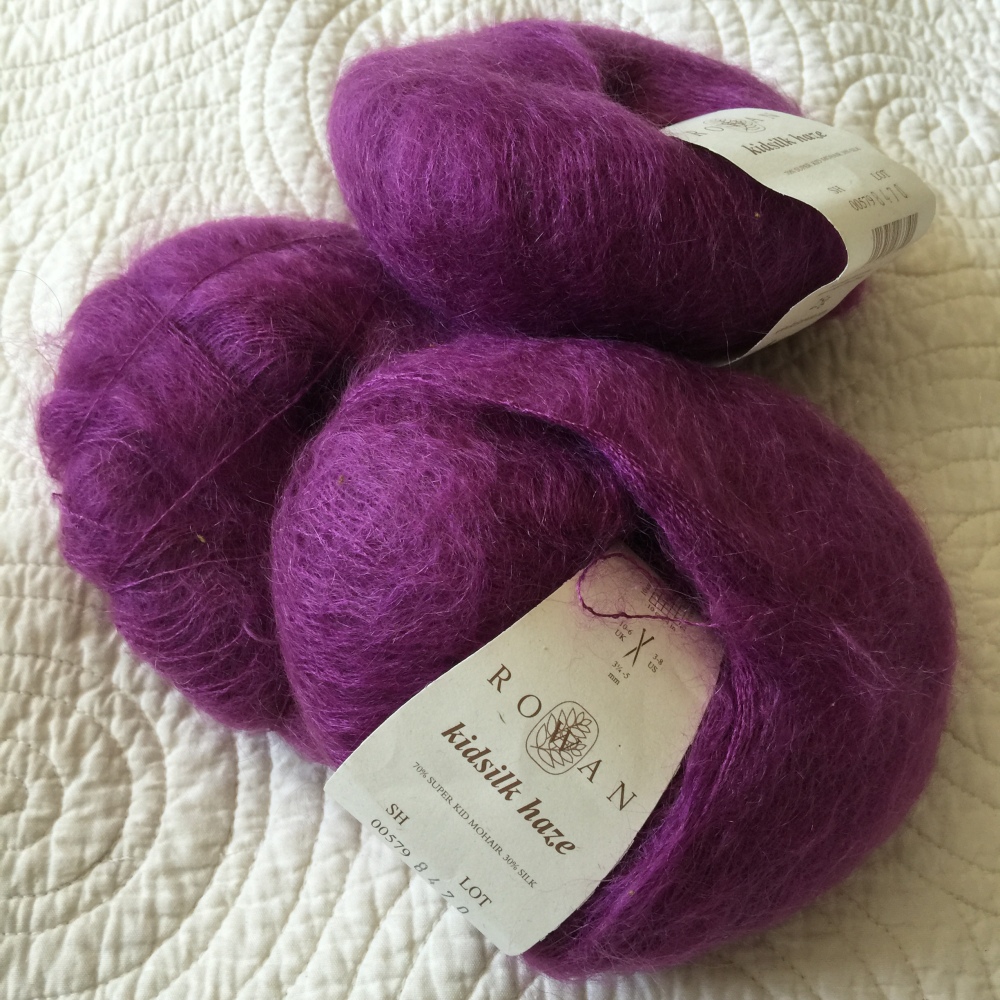 The pattern is Feathery Lace Stole from a book I’ve had for years and used many times: Exquisite Little Knits: Knitting with Luxurious Specialty Yarns by Iris Schreier and Laurie J. Kimmelstiel. Now, I have no memory of when or where I acquired this book. I don’t really tend to knit with many of the yarns featured in the book, which tend to be high end novelty yarns. I probably got it on sale somewhere otherwise I honestly don’t think I would have picked it up. However, I’ve knit several patterns from it and one in particular several times (Flying V Scarf). I think the reason I’ve found it so useful is that, being for novelty yarns, the patterns tend to be understated and designed to let the yarn’s texture make the piece. So, there’s a lot of garter and stockinette with simple but effective shaping and not a lot of “extra”. This means that it’s easy to substitute other yarns and have it turn out well.

Back to the Stole. The pattern is actually written for kidsilk haze and I actually have just a little more than enough. I wondered out loud who would possibly want a stole in that shade (not judging–it was an honest question). My mom spoke up. So, onto the queue it went until I had a moment not consumed with deadline-driven test knitting. For the last several days I’ve been knitting away at my Athena shawl (more on that in a later post) and I ran into a snag. I didn’t have anything else on the needles so, while I was waiting for the designer to get back to me, I cast on for the stole.

What exactly does this have to do with hearts and love, you ask? Well, you can be sure that I wouldn’t knit this for anyone that I didn’t really and truly love. Casting on and getting going was a royal pain. The yarn is slippery and impossible to see. By sheer chance I cast on the right number of stitches, although I don’t think anyone would ever be able to tell if I hadn’t. The lace pattern is an easy two row repeat. But, for the first several rows, I questioned my sanity as I yarned over and skp’ed my way through a slippery, hairy mess. It really seemed like I was knitting with something I might have pulled out of the shower drain in my younger Manic Panic infused days. Then, the pattern was established and it got to be a little easier. So far, I’m pleased with the results!

My other heart and love related story has to stay under wraps for a few more days. I am participating in a Valentine mini swap over at Carol E. Herman Designs. This one involves a small gift, a small handmade item and a card. I will say that this project has made me realize I need better size US1 dpns as the ones I have are, shall we say, sub-par. I am late sending my package off (thank you, record snowfall) but am planning to send it tomorrow. I’m finishing up the last bit of the handmade portion, and I’m really excited! I hope the recipient likes it. I will post pictures here once it’s been received and no longer needs to be kept secret!