Size made: Added extra rows to make it longer and use up yarn

Needles: US11s for the body and 17s for the bind off

Modifications: Added rows, as noted above 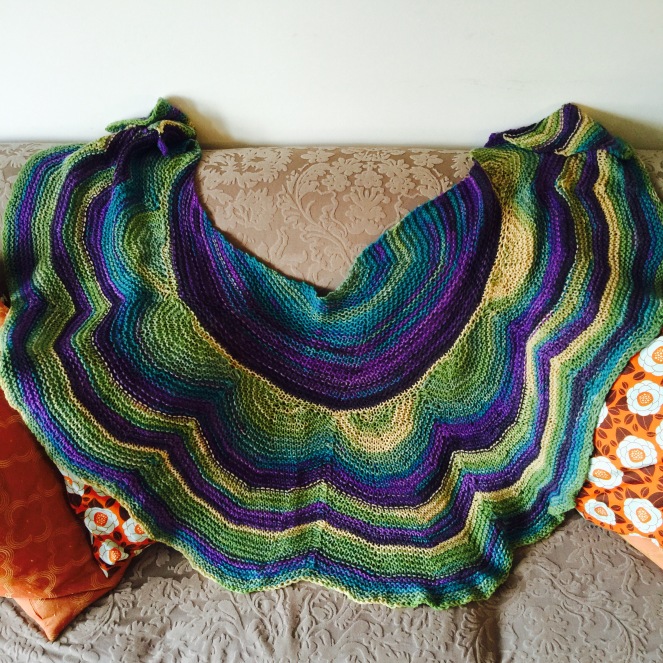 As hoped, the ruffle factor was tamed by blocking. I like that it’s a deep crescent shape as I think it will be good for wrapping up in. I love how the yarn meshed with the pattern. I prefer the random and variable color changes to the orderly appearance of the stripes the pattern calls for.

I knew I wanted it to be a big shawl, so I just kept working in pattern after I reached the end. I ended up doing almost two full extra “stripes” which comes to about thirteen extra rows, I believe. The edge is finished with an I cord bind off which I did very, very loosely as I wanted the edge to block well. I planned well as I had about 6.5 yards left after binding off!

I didn’t block it super aggressively. I just washed it, let it soak for a bit, squeezed all the water out that I possibly could, and laid it out without pinning it. I just sort of patted it into shape. The fabric already had a good deal of drape as I was working with worsted yarn on US11s so I didn’t need to stretch it much. I think it worked out perfectly. It flattened out without getting overly lacy.

I would definitely recommend this pattern. It’s a quick and mostly easy knit with a few tricks thrown in to keep it interesting. However, the pattern is easy to memorize and, being completely in garter stitch, works up fast.

I hope my mother in law likes it! I will see her this weekend and will give it to her then.