Day 8: What’s your most challenging project?

There are two kinds of people–those who play favorites, and those who don’t. By that I mean that some people are able to pick out their one favorite thing out of a category, like a favorite ice cream flavor or favorite book. I’ve never been able to narrow things down that much. My superlatives change depending on my mood, the context, what I ate for breakfast that day, you name it. The same idea goes for most anything. So, I am not going to be able to come up with a single answer for today’s question.

What I can say is there’s a reason I’m not exclusively a shawl knitter, or a sock knitter, or an insert-object-of-choice-here knitter, and that’s because I enjoy the challenges that variety brings. I like to be able to make new and different things, or to tackle a complex-looking pattern and chip away at it until it’s manageable (I’m talking to you, Clapotis), and to stretch my skills and expand my experience. With that in mind, my most challenging projects have been the ones that have pushed me to learn something new.

One pattern in particular spurred me to learn how to use dpns. Sometime in college, I made three* different tea cozies using the Kureyon Kozy pattern. Either I hadn’t used dpns prior to that, or I hadn’t used them much as there was definitely a learning curve involved. The pattern begins at the bottom, at the center of the base. You cast on a few stitches and increase as you knit outward, creating a circle. Then, you make a second circle, join them by knitting each stitch together (like a three needle bind off, except you don’t bind off), and then knit upward to form the sides. I must have started and restarted a million times before I got it, but get it I did! And then I was off. Along with the tea cozies, I made several hot pads by making the circles out of kitchen cotton and then binding them off together. In fact, we still have a stained and bedraggled one in use in our kitchen right now. If I were to make a hot pad or cozy now using the same pattern, it would be a breeze–but at the time it was a challenge and it upped my skills significantly.

Another project that challenged me in a new way was knitting my first River District Toque. The construction was different than I had done before–knit the brim flat, join the edges, then pick up stitches around the crown and decrease. That wasn’t hard to do, but I decided I wanted to learn how to graft in pattern to join the edges instead of seaming them. I poked around online until I found a tutorial that worked for me, got to work and ended up with a nearly invisible join. I blogged about it here. It was a really cool new skill to have and, as it turns out, has made regular grafting (Kitchener stitch) seem simple. 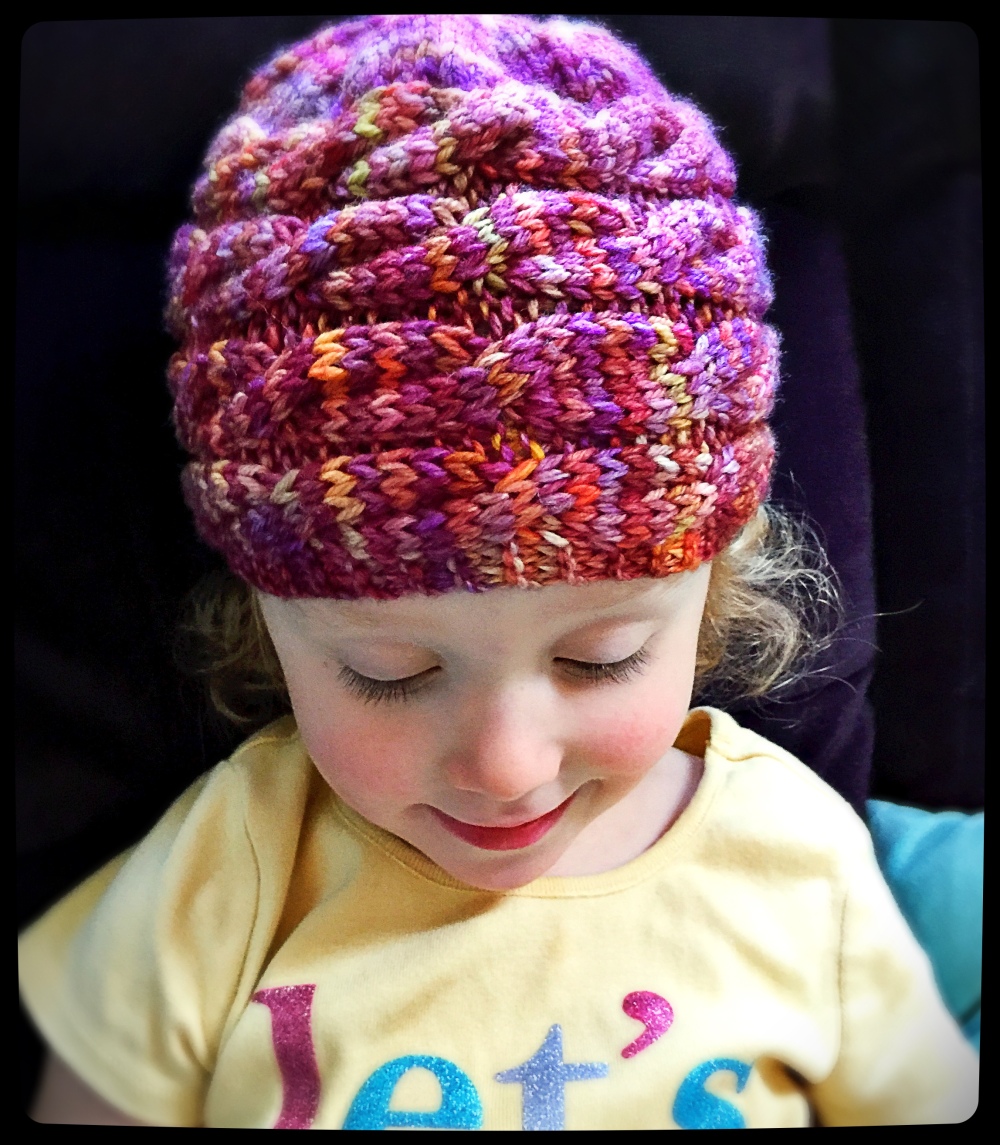 The third project I’ll discuss wasn’t really all that challenging…or wouldn’t have been if I hadn’t kept making mistakes. In an effort to not rip back my Little Phryne for the third or fourth time, I instead dropped one section of it back by several rows then reknitted each partial row. I blogged about that process here. Beware, as the pics included are not for the knitter who is faint of heart! It was definitely a challenge! However, it was a worthwhile skill to learn. I’ve used it a couple of times on other projects already.

Of course, while writing this post, I’ve thought of several other projects that would be worth mentioning. I guess that’s the great thing about knitting: the challenges and growth are there to be had whenever you want them, as well as the tried and true, comfortable, TV knitting. They both serve an important purpose for me and I wouldn’t willingly give up either. What about you? What are your most noteworthy knitting challenges?

The 30 Day Knitting Challenge is the creation of Meggiewes who blogs at Knitting in Wonderland.

*I know I made at least three, but there may have been more. Two were given away as gifts and one is somewhere around here. I’ll try to dig it out sometime and photograph it.