I’ve got another one!

Yarn: 719 yds/240 gm malabrigo Silky Merino in colorway Pradera. It’s about half silk, half merino and it’s a lightly spun single. It’s fairly splitty, but I expected that.

Size made: Until I ran out of yarn! I had about 3 yds left over after binding off. I’d call that a yarn chicken win. It measures about 90″ x 42″ after a fairly aggressive blocking.

Modifications: I fiddled around with the textured stitch a bit before getting it how I wanted it. The pattern doesn’t specify how many sts to cast on. I found that my first garter tab start gave me 2 extra sts, one on each side of the center spine. I thought that diluted the textured panels a bit so reworked it to eliminate those extra sts. The way I did it also helped the textured panels line up the way I wanted (stitches offset by one instead of stacked). Exact notes on what I did are on my project page.

I also changed the number of rows in each section and the total number of sections. The first was because I wasn’t really paying attention and the second was because I wanted to make it larger than called for as well as use up all the yarn. I didn’t do as many rows of garter st at the end as my yarn didn’t make it as far as I’d thought.

Difficulty: Medium, but with a caveat: the actual knitting was very easy. The “pattern” is more of a loose recipe. It has the textured stitch pattern, but leaves the nuts and bolts up to interpretation. This would not be a good first shawl project as you need to have some understanding of how a top down triangular shawl works.

This colorway was tricky to photograph. The actual colors are somewhere in between. 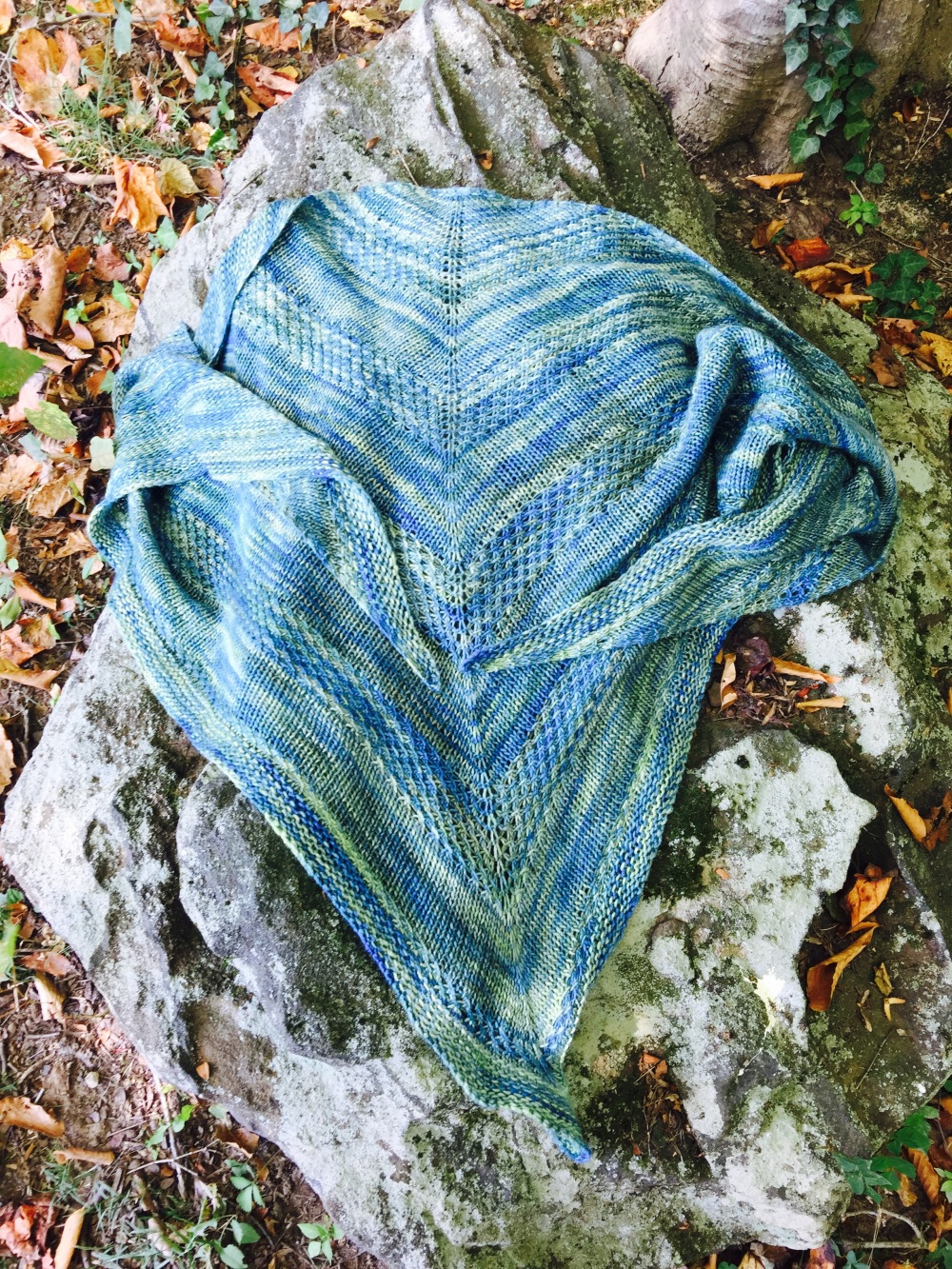 When blocking, I worked hard to get the top edge flat and the center spine straight. Since a top-down garter tab triangular shawl comes off the needles in more of a diamond shape, that can take a little doing. I used wires on the top edge and pinned the spine, but didn’t do anything to the cast off edge.

You can kind of see how the top center has a little extra bulk there. Also, the garter st border flares a bit since the gauge is different.

I had a helper again:

I think the textured stitch works well with the colorway. I don’t love the stockinette portions, but they do help keep it from getting too crazy. It’s soft, has nice drape, and should be easy enough to wear. Bottom line, though: if I made this shawl again, I wouldn’t. There are a ton of awesome shawl patterns out there that are much better written–and that don’t require you to reinvent the wheel. 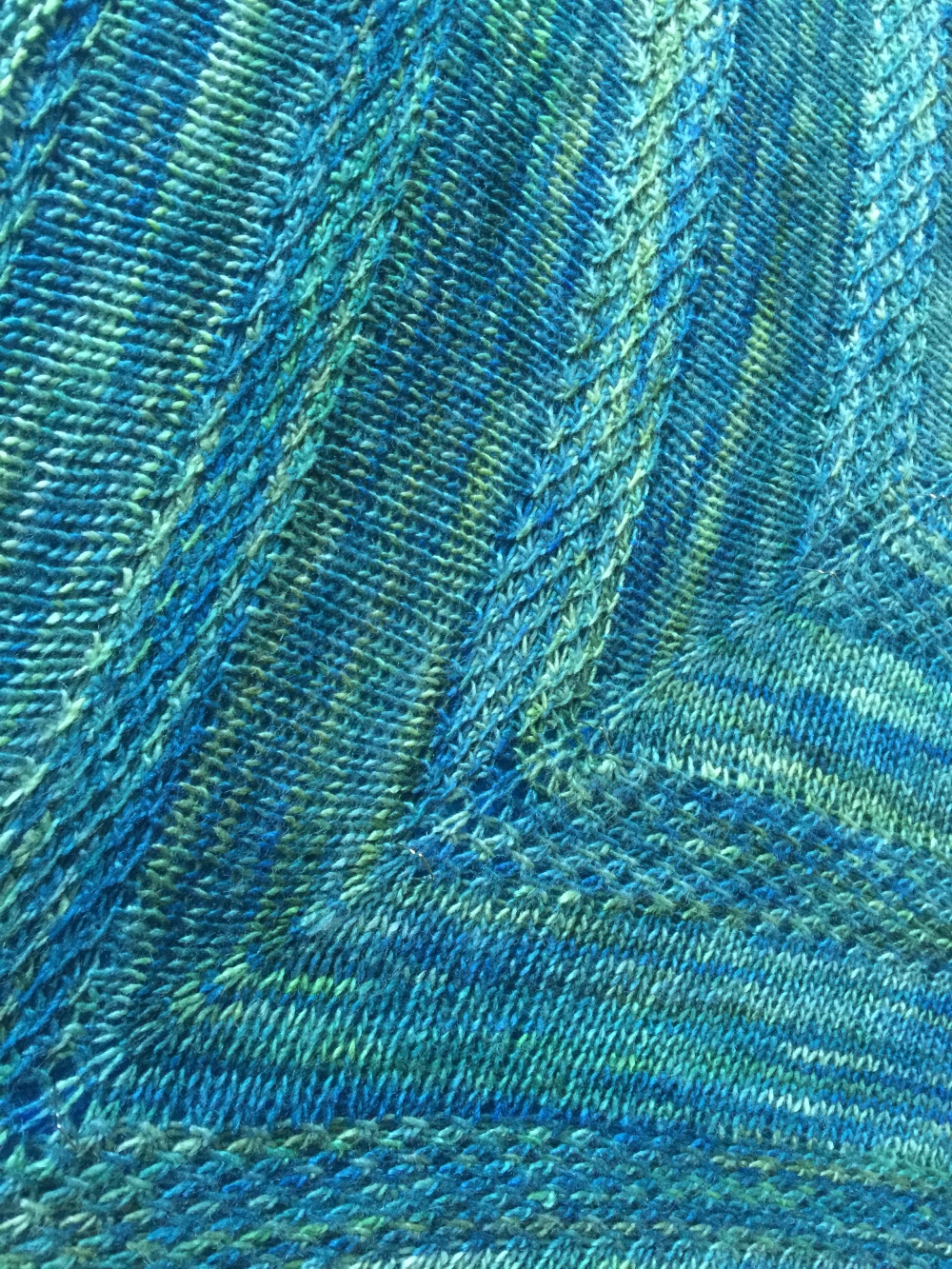 I’m excited for the weather to cool off so I can start wearing shawls again!

Yarn: 922 yds/471 gm madelinetosh Tosk DK in Saffron. It was four full skeins which were slightly over yardage (I think). Madelinetosh yarns are sold by yardage and not weight, so it’s tricky to tell just how much you have.

Size made: Rather large. I added more lace sections but then didn’t have enough yarn to do as robust a garter border at the end. I just kept going until I ran out of yarn. Literally–I had to pull out two and a half rows or I wouldn’t have had enough to bind off. I ended up with less than 1 gm of yarn remaining. After a light blocking, it measures around 120″ long and 50″ deep.

Techniques used: As written in the pattern, I think. I didn’t take note of the bind off and now I’ve forgotten. I believe it was a k2tog tbl kinda deal. I used russian joins throughout so I only had two ends to weave in at the end. I knit the whole thing in about three weeks and then took six months to weave in two piddly little ends.

Modifications: More lace sections, fewer rows of garter stitch at the end. I used just over the top end of the yardage range listed (750-915).

The color is tricky to capture accurately. It’s a lovely red rust with gold undertones.

I liked making this shawl a lot. The pattern is clear and easy to follow, and the knitting is simple but with enough variation that it’s not mind-numbingly boring. Also, there are some great details, such as the selvage edge:

It’s super easy to do and looks clean and finished. I’m definitely filing it away for future use.

Not surprisingly, I like the yarn a lot. I haven’t met a madtosh yarn yet that I didn’t like. In this case, I love the depth of the colorway. There’s somehow a lot going on there without having extreme variations. The result is a luscious and deep color that doesn’t fight with the pattern texture. It’s squishy soft and easy to work with. It’s actually a little less soft after blocking, but still easily soft enough for neck wear.

The yarn does, however, grow significantly with blocking in true superwash fashion. As usual I forgot to take pre-blocking measurements, but you can bet it wasn’t ten feet by four feet. I’m going to leave it as is because I like some real estate in a shawl, and I’m planning on keeping this one for myself. If I were giving it to anyone else, I’d probably dampen it and give it some time in the dryer to pull it in a little.

I’ll get more modeled pics when it’s not 80F out! However, since I said in my last post that I could possibly lose my child in a shawl this size…POIDH*: 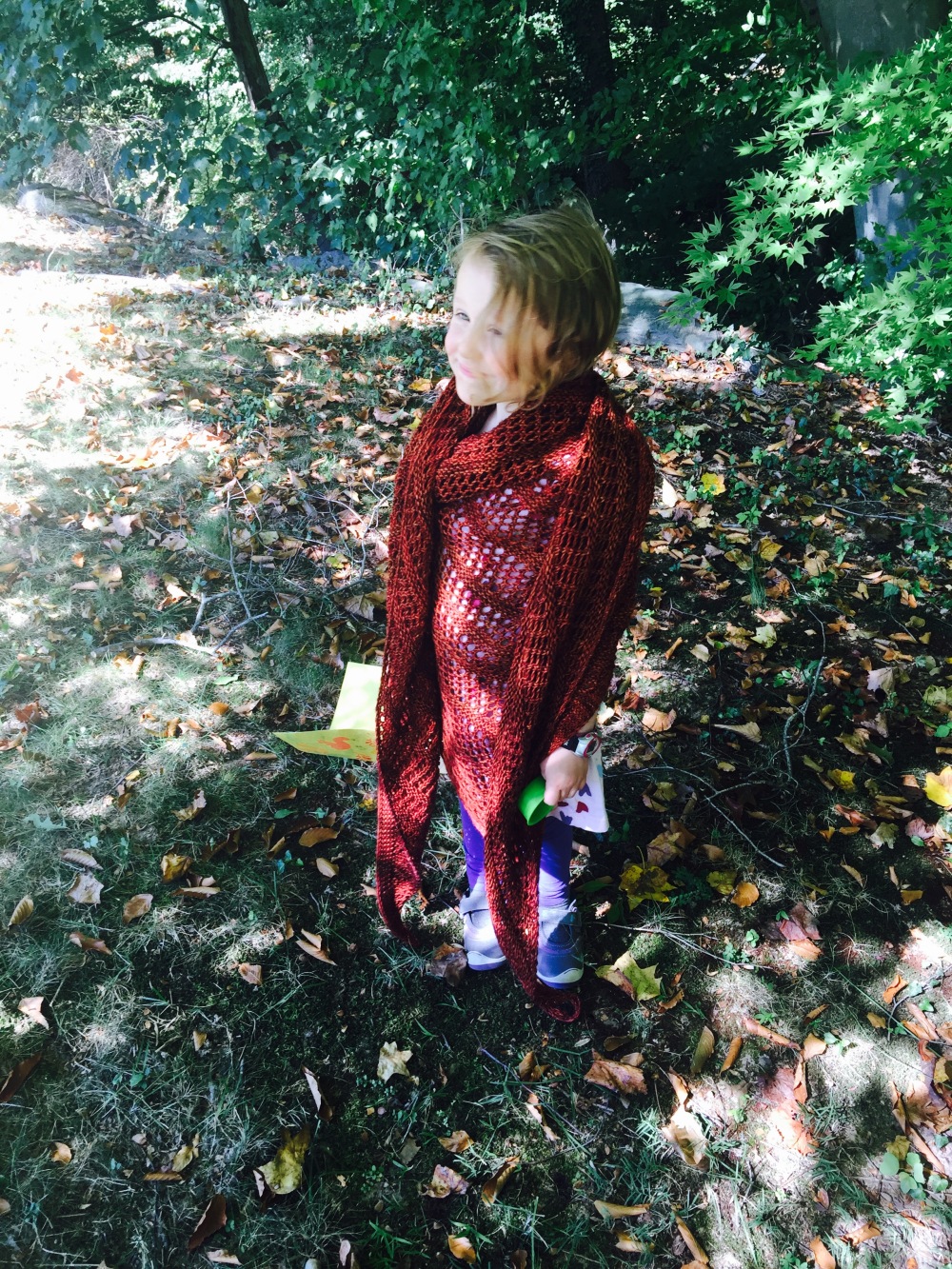 And she wanted me to keep taking pictures of her, so here’s some gratuitous kid pic spam! 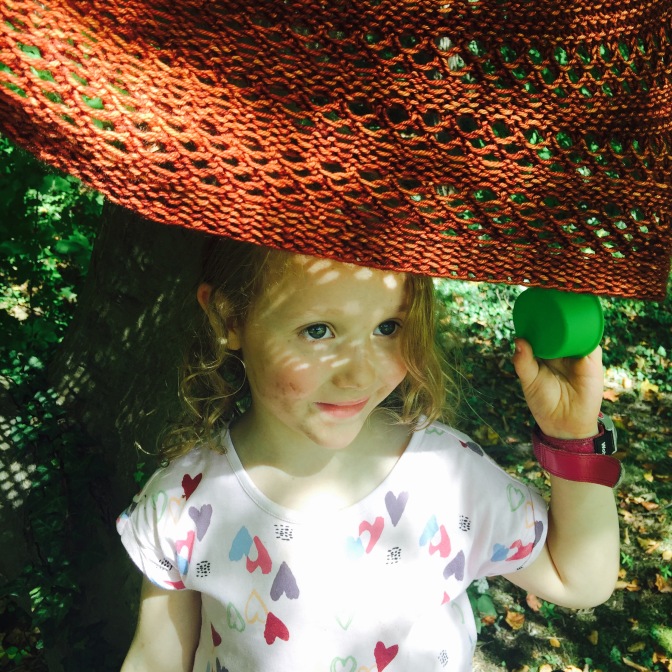 I’m very happy with how this shawl turned out. It’s the best kind of project, really–relaxing but not boring, and a great match of pattern and yarn. The result is an accessory that’s easy to wear and looks more complex than it is.

Since my last post, I wove in the (two piddly little) ends on another of the four shawls. I’m thinking I just might be able to block it today. So, who knows? Maybe there’s another FO Spotlight post in my future! In the meantime, I’ve been matching up yarns and patterns on ravelry to try to get a handle on my stash, and putting in some serious work on my Feathery Lace Stole. What are you working on?

*Pics or it didn’t happen

I think I might, in large part, be a process knitter as opposed to a product knitter. I think most knitters have at least a little bit of each side of things and I’m no exception to that–I definitely love having knitted things to use and wear. I just can’t come up with any other explanation for the ever growing pile of projects that I’ve bound off but never really finished. You know, my UFFOs*. Well, the stack on the end of the sofa was getting a little out of hand, so I figured I’d tackle it.

I have four–count them, four–bound off but otherwise unfinished shawls. If you count my Volga, a giant cowl/shawl hybrid, I guess it’s actually five. Two of those are completely understandable: my Frabjous Karee (bottom left corner) needs approximately 15 billion ends woven in and my Elephant’s Pants (top left corner) needs approximately 15 billion buttons acquired and attached. Any procrastinator worth her salt can rationalize those away. However, I have two single color, non-buttoned, no seams required shawls just waiting to have ends woven in and to get blocked and photographed. I used russian joins for both of them, so there were only two ends left. I had a little energy this afternoon so I’m now well on my way to getting that total down from four (five) to three (four). Imagine my surprise when I sat down with my knit picker and my Paris, je t’aime! (top right corner above) and found I had already woven the ends in.

I’ll give a full rundown on this project once blocking’s done. It’s currently spread out on the porch, using all the blocking mats I own just to pin it out lightly. I was worried when I was knitting it that it wouldn’t be big enough. I should have had faith in the magical growing abilities of superwash wool, because it’s going to be giant.

For reference, each mat is about 24″ square. So, it’ll have a wingspan of close to 10 feet and a depth of four. It’s big enough to lose my child in. I’ll have to wrap the ends around five times or else they’ll drag on the ground. Why, exactly, was I worried? I might have to throw it in the dryer to shrink it back up a little!

In any case, I’ll soon be able to take it off the WIP list. In anticipation, I think I’ll get the next one ready to block. I really am worried that this one won’t be big enough..

I guess it’s been a while since I’ve posted, huh? I just pulled up wordpress on my laptop and couldn’t get my site to load. I thought for a second my blog had been deleted!

This is just a quick post to say that, while it’s been one heck of a year, things are finally calming down a touch. I think about blogging a lot, but it’s been hard to set aside the time and space to make it happen. I’m planning on remedying that! I also had a concurrent lull in my knitting, but that seems to have come to an end, too. I have a few shawls to blog about, some luscious yarn acquisitions to share, and some serious project planning to indulge in. Back soon with more!

In the meantime, here’s a quick peek at what I’ve been working on lately. It’s a Yoga Shawl by Andrea Mowry, a pattern I’d had my eye on for a while.

I even got the chance to do some beach knitting! 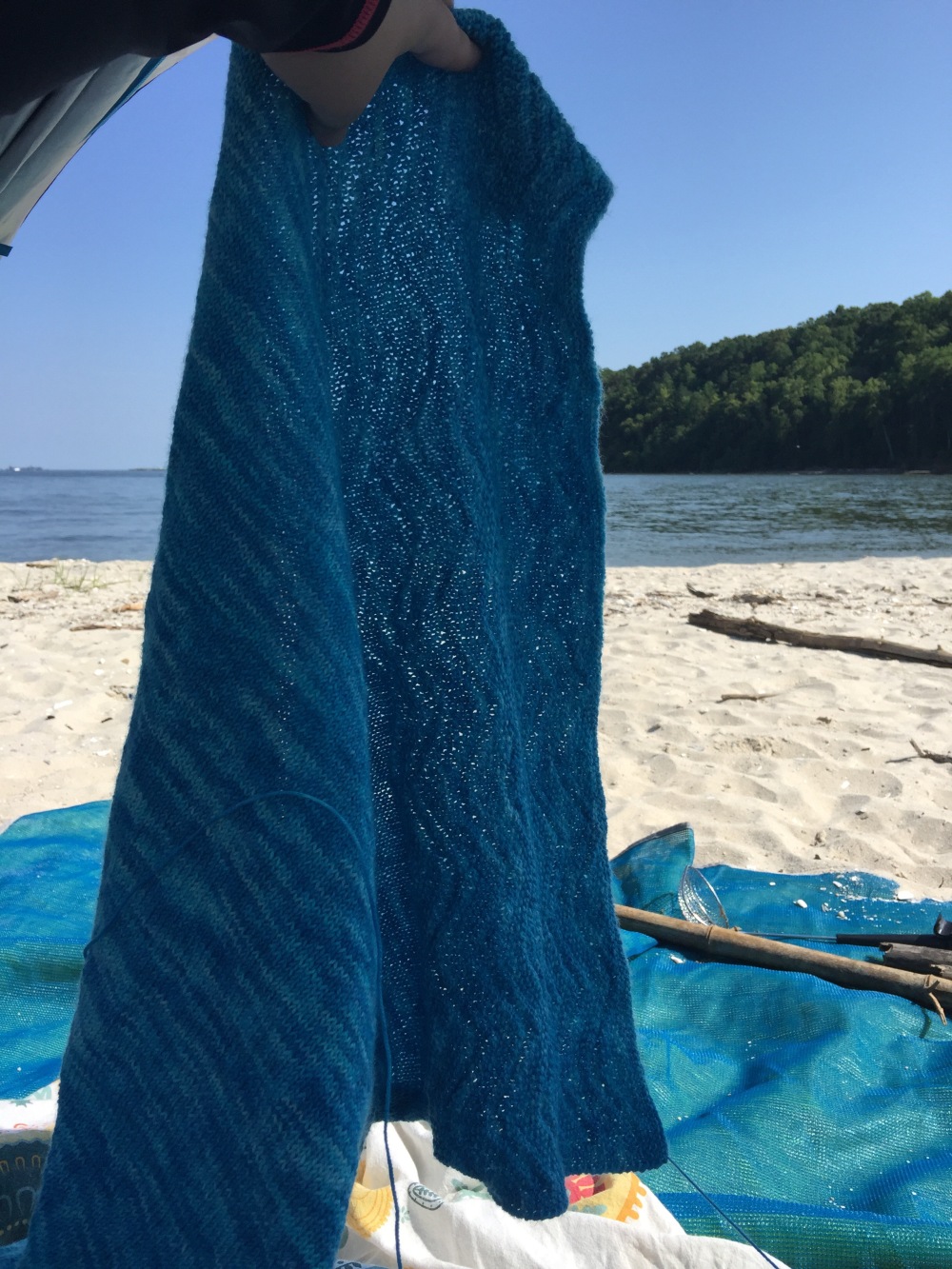 Lastly, I’ll leave you with a link to a video I stumbled across on ravelry earlier. I wish I’d found it before starting the yoga shawl, but c’est la vie. It’s a tutorial on a simple technique to minimize the gaps that can occur when switching from knits to purls: Knitting Help from VeryPink Knits