I think I might, in large part, be a process knitter as opposed to a product knitter. I think most knitters have at least a little bit of each side of things and I’m no exception to that–I definitely love having knitted things to use and wear. I just can’t come up with any other explanation for the ever growing pile of projects that I’ve bound off but never really finished. You know, my UFFOs*. Well, the stack on the end of the sofa was getting a little out of hand, so I figured I’d tackle it. 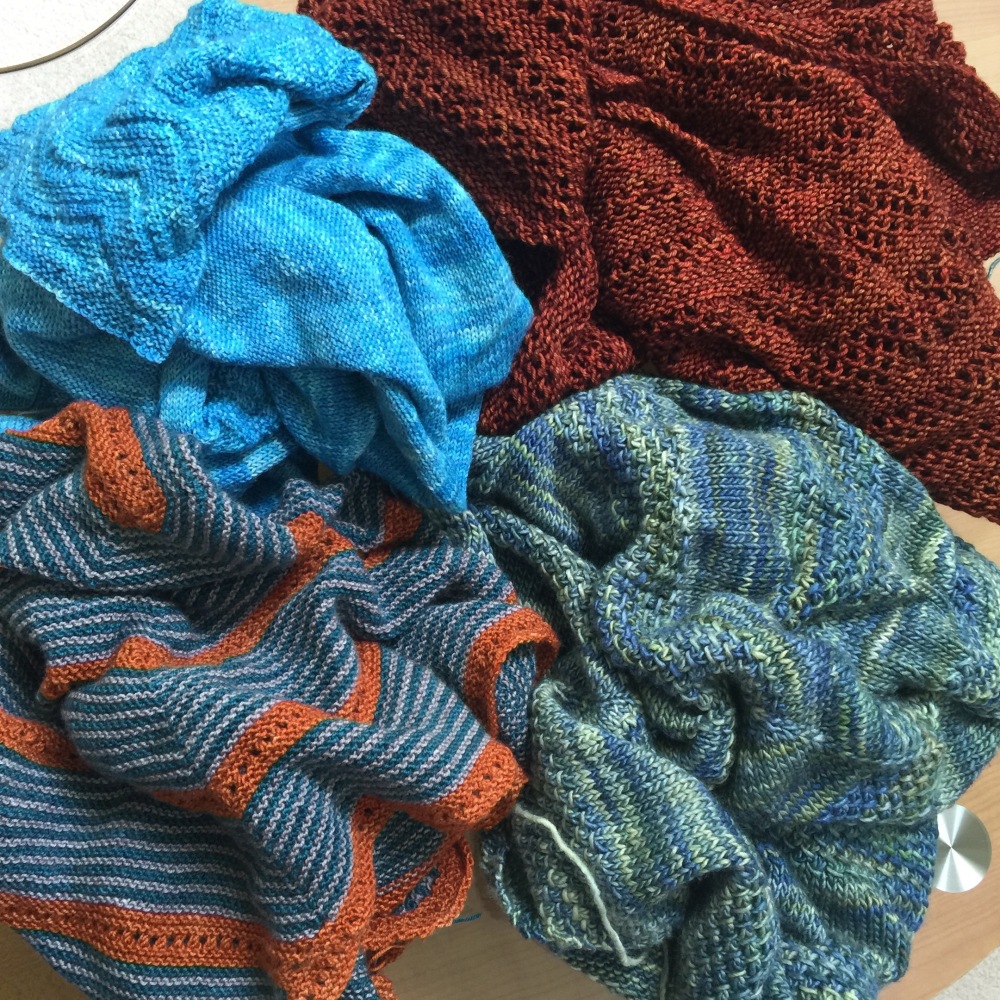 I have four–count them, four–bound off but otherwise unfinished shawls. If you count my Volga, a giant cowl/shawl hybrid, I guess it’s actually five. Two of those are completely understandable: my Frabjous Karee (bottom left corner) needs approximately 15 billion ends woven in and my Elephant’s Pants (top left corner) needs approximately 15 billion buttons acquired and attached. Any procrastinator worth her salt can rationalize those away. However, I have two single color, non-buttoned, no seams required shawls just waiting to have ends woven in and to get blocked and photographed. I used russian joins for both of them, so there were only two ends left. I had a little energy this afternoon so I’m now well on my way to getting that total down from four (five) to three (four). Imagine my surprise when I sat down with my knit picker and my Paris, je t’aime! (top right corner above) and found I had already woven the ends in.

I’ll give a full rundown on this project once blocking’s done. It’s currently spread out on the porch, using all the blocking mats I own just to pin it out lightly. I was worried when I was knitting it that it wouldn’t be big enough. I should have had faith in the magical growing abilities of superwash wool, because it’s going to be giant.

For reference, each mat is about 24″ square. So, it’ll have a wingspan of close to 10 feet and a depth of four. It’s big enough to lose my child in. I’ll have to wrap the ends around five times or else they’ll drag on the ground. Why, exactly, was I worried? I might have to throw it in the dryer to shrink it back up a little!

In any case, I’ll soon be able to take it off the WIP list. In anticipation, I think I’ll get the next one ready to block. I really am worried that this one won’t be big enough..