I cast on a new project last night. It’s one I’ve been thinking about for a few days but just couldn’t settle on what yarn to use. The pattern is Lacy Loo and it’s for a shirt/tunic/dress for the little. It calls for worsted or aran weight at a gauge of 4 sts to the inch. Now, in my mind that’s closer to bulky. But the pattern is, well, lacy, so I’m afraid bulky weight won’t show the lace well. The aran weight choices I already have in my stash in sufficient quantity are some malabrigo twist or some acrylic. The malabrigo is not in a great colorway for this, so I hesitate to use it. The acrylic? Just not doing it. It’s not decent acrylic. It’s older stuff that I want to use for things that won’t be right against skin. So I started looking at worsted, knowing it would have to be on the loose side.

I have tentatively settled on Berocco Linet. I have a ton of it from the legendary Goodwill windfall. I think it could be really cool, but it also might not work at all. 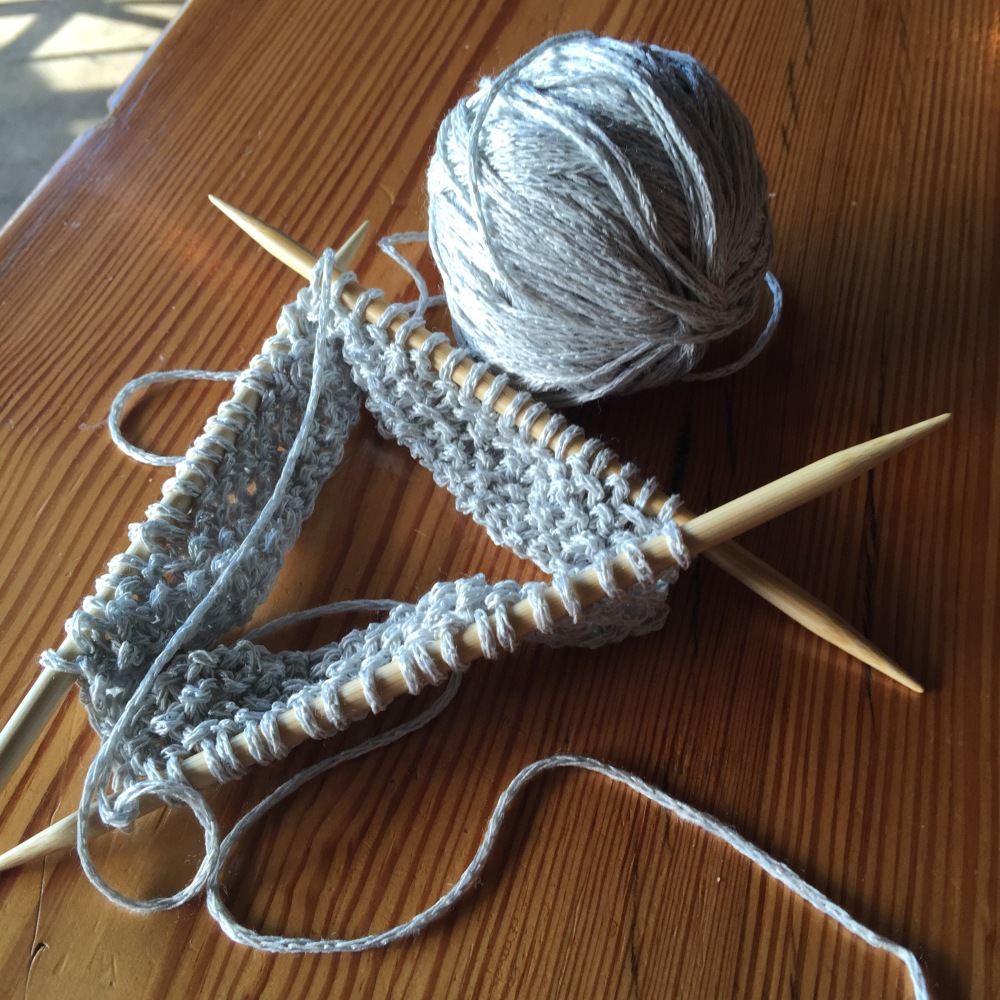 Here’s the first few rows of the neck started. It’s a pain in the ass to knit. I’m using US9s and will be switching to US10.5s shortly as that’s what it took to get gauge. I don’t have circs in that size so I’ll be using dpns. The yarn is a weird texture and construction. It seems like the metallic pieces are less flexible than the rest so it bends in a weird way. It’s kind of splitty. Those six rows of seed stitch took me approximately forever. There’s a good chance the fabric will be too loosely knit to be practical for a garment for a three year old.

At the same time, I kinda love it. It’s shiny and has that linen-y drape. I’m going to keep going with it for a bit and see how it progresses. 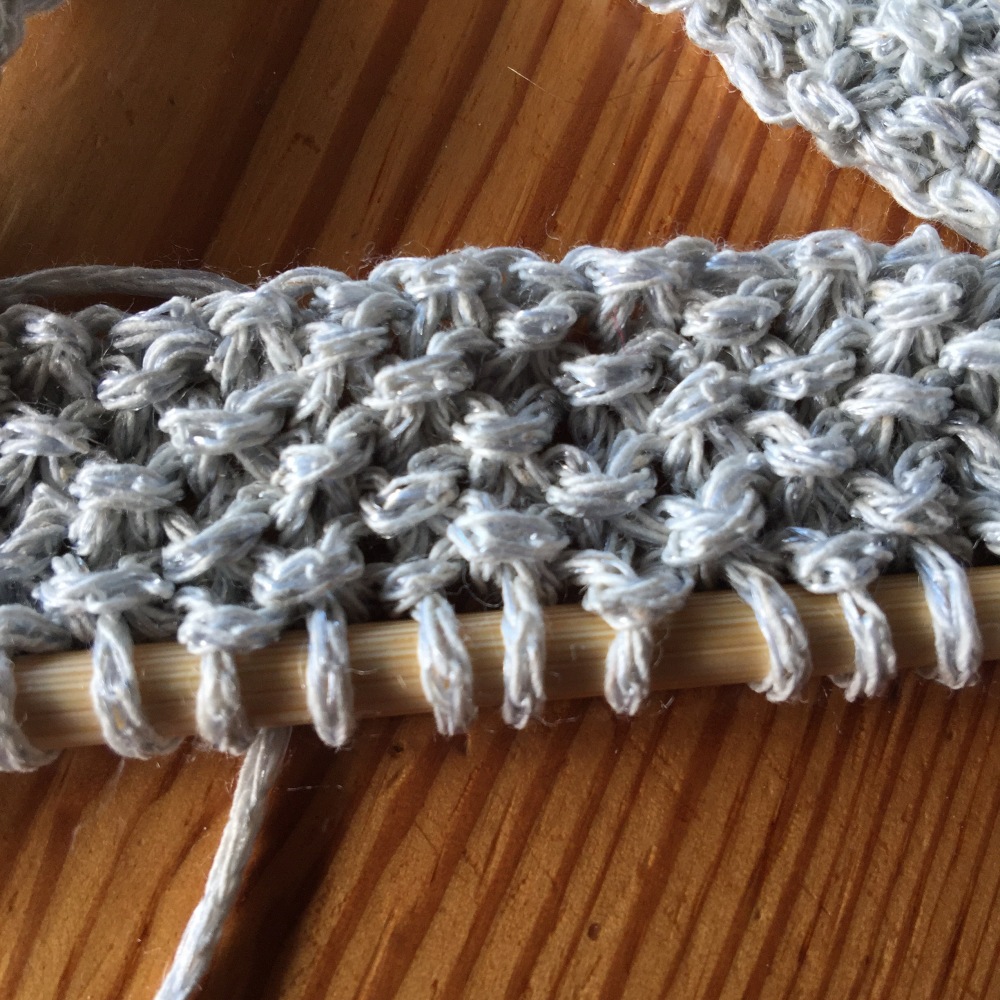 If it goes all right on the 10.5s I’ll invest in an appropriate set of circs.

One pro to getting this done is that, according to the pattern page, you can get a free pattern of you complete a Lacy Loo by November 15. I’m totally down for free!

In other knitting news, I have finally finished my second pair of Passport Mitts and have cast on for a third in the same orange yarn. I’ll give the finished pair a review post of their own soon. I’ve also finished and blocked my Tunbridge Hat but have not been able to get modeled pictures in natural light yet.

I’m making good progress on a Color Dipped Hat for my SIL’s bf (not sure I’ve blogged about this one yet). The pattern is from Purl Soho and is the first of theirs that I’ve attempted. I love their stuff, though. Everything has such clean lines and lovely color choices, and most of their patterns are free. It’s turning out beautifully but I am a bit worried it’s too big. I’ve made the decision to carry on (the 3.5″ of brim I’ve done so far have taken forever–fisherman’s rib eats both yarn and time) and to go for long and skinny when I block it. I’m going to drop the blue and finish it with just the charcoal from here on out. 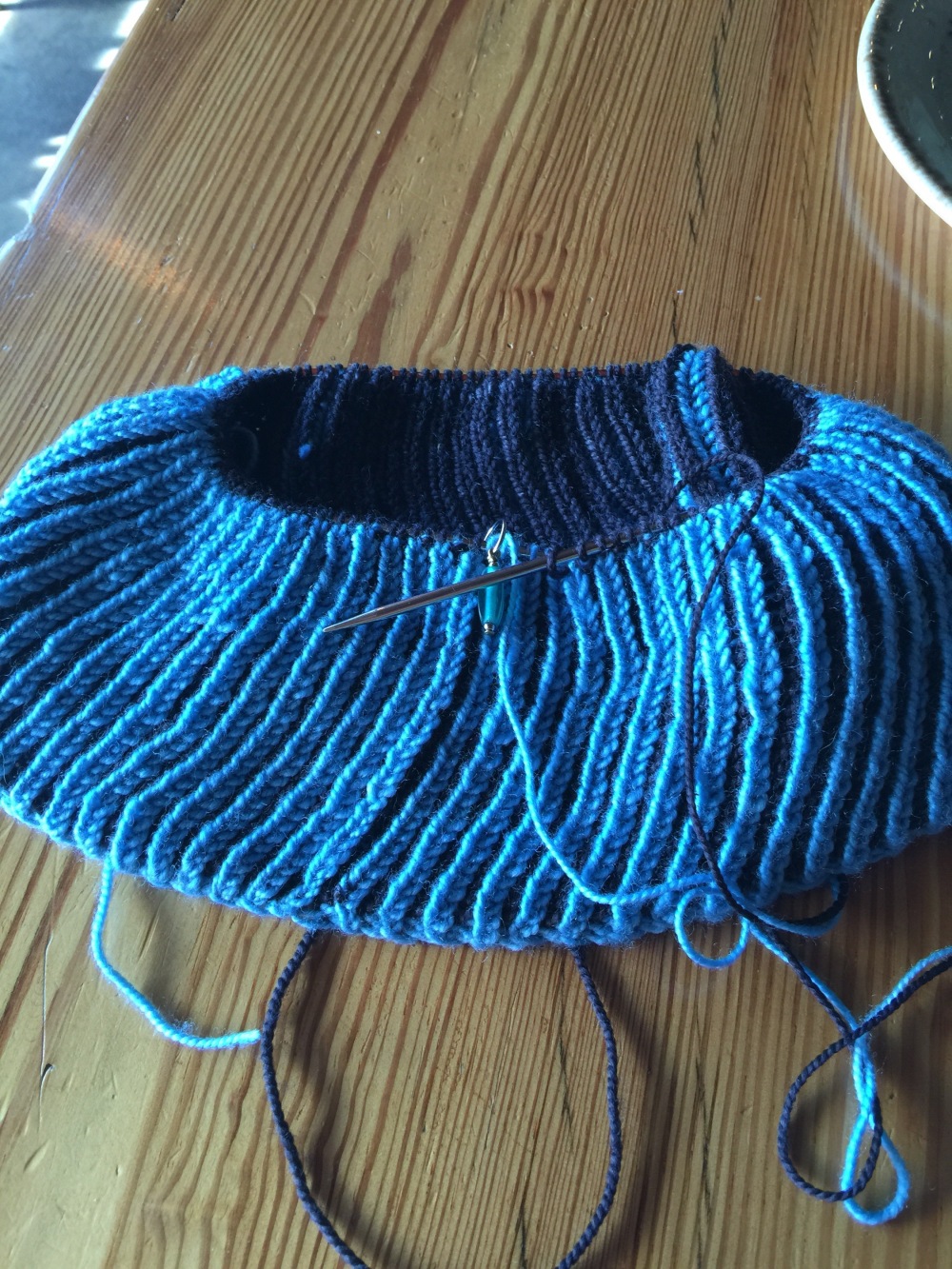 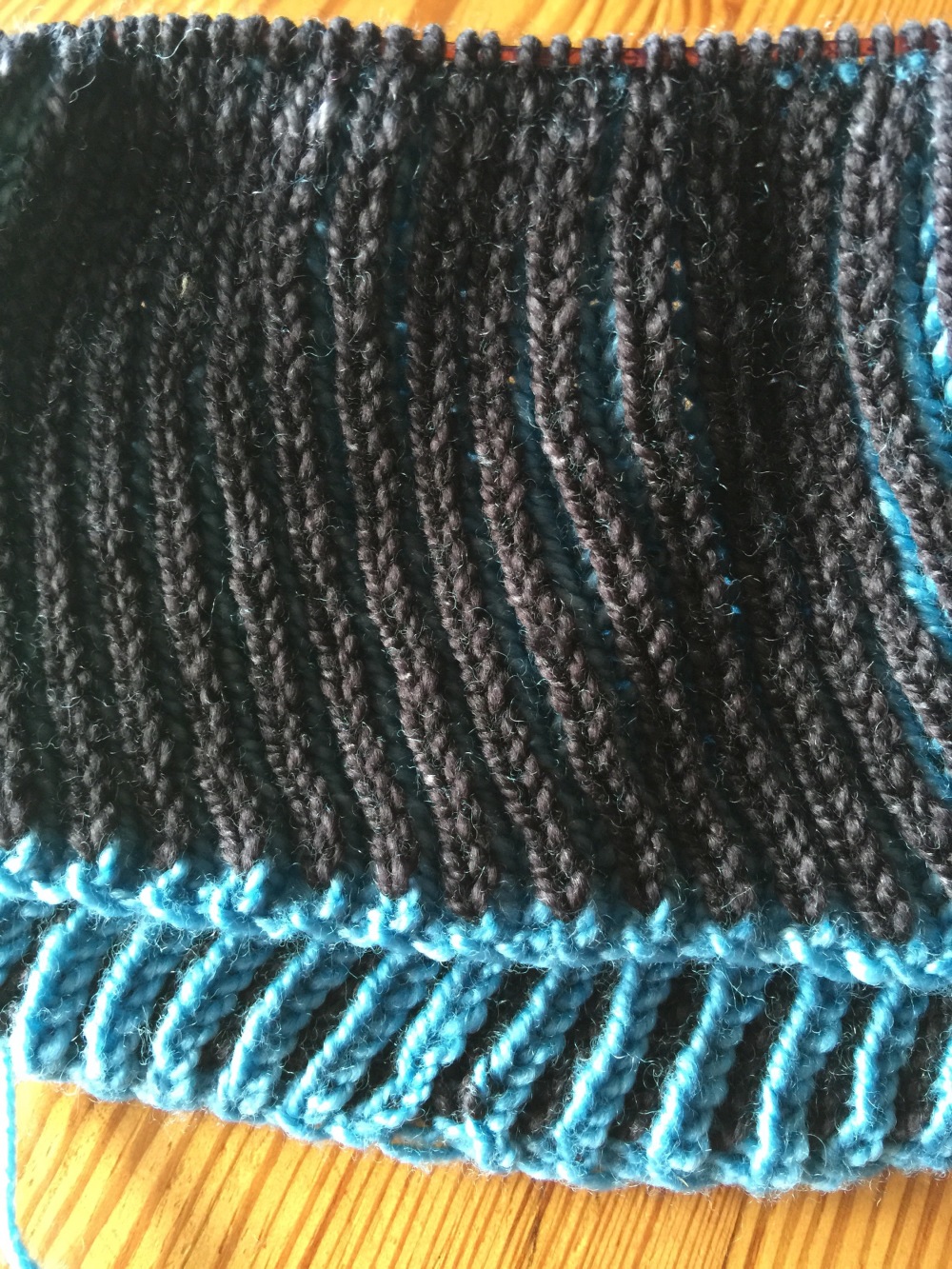 It’s reversible! And so squishy! This pattern is definitely a favorite.

I’ve been trying to reach out and find more knitting community lately. I’ve been hanging out at my LYS a bit when I have time and I went to a fiber arts meet up last night. It’s been good to meet other knitters and fall into the natural collaboration that happens. I hope that once I go back to work, I will still be able to find the time to continue.

There’s a lot more in my head, but my phone is threatening to overheat! So until next time, happy knitting and I’m feeling some healthy jealousy for everyone who was able to go to Rhinebeck last weekend. Next year, I’m going and that’s final!