A few years ago, I had the opportunity to go to a workshop on internalized misogyny (don’t be scared off–this really is about knitting and it has a happy ending). One of the exercises we did was designed to help people of the female persuasion recognize some of the unconscious misogynistic thoughts that are very, very common. I was shocked at how my typical self-talk measured up when I started paying attention to it. I would generalize that many, if not most, women habitually, internally, unintentionally demean themselves in a myriad of tiny ways. When I started thinking about how to blog about my newly completed sock, I found myself automatically including tiny apologies for the things I did wrong or don’t like about it.

Then I remembered that, for realz, I made a freaking sock. And that is awesome, period. So I am borrowing a term from the wonderful and slightly crazy Tyra Banks and dubbing it “flawsome”. Get it? Flawed + awesome = flawsome. It’s awesome, not in spite of its flaws, but because of them. Furthermore, I don’t think it’s any coincidence that the phrase “flawsome sock” just makes me think of “awesome sauce”.

So….yeah. I made a sock! And it’s just what it’s supposed to be. It fits, it’s comfy, it’s a cool color and making it helped me up my knitting skills. I won’t bore you with details of any of its less than perfect features because they really don’t matter (and to be honest, I pretty much covered all of them in a previous post). 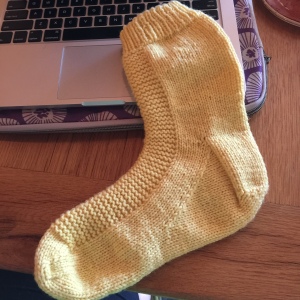 I even wove in the ends and everything. How’s that for awesome? Check! And just to make sure that I don’t succumb to SSS*, I’ve already cast on and made it halfway down the cuff: 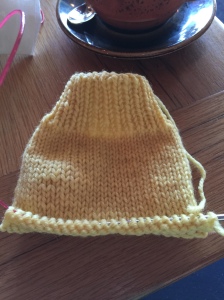 I used (one size smaller) dpns for the ribbing and otherwise will use magic loop for the rest. Hopefully my gauge is the same! It’s just much nicer knitting on my Addi sock rockets than the aforementioned awful dpns I used for half the last sock.

In the meantime, I have more fun stuff on the horizon. I should get my extra skein of Koigu KPM on Saturday so then I can work on getting my Drachenfels finished. I needed something a little easier on my hands than the socks, so a couple of days ago I cast on for my first Clapotis. Those of you who’ve paid attention to the online knitting community for a while will know that I’m over ten years late on riding that trend, but I would argue it’s become timeless at this point! Plus, it really seemed like the best pattern for the project. I’m making a wrap for my mother in law out of this Plymouth DK Merino Superwash: 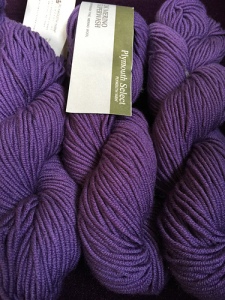 I’m hoping I’ll be able to make it a little wider than the pattern calls for, but we’ll see how it goes. I don’t have the best pic yet of my progress but this should give you an idea:

Other mods I’m making are to follow the advice of (literally) thousands of knitters ahead of me and to RS purl/WS knit the stitches to be dropped instead of using stitch markers to mark them. Also, while the pattern calls to knit the stitch right before and the stitch right after through the back loops, I’m also doing the purl equivalent on the WS. This is supposed to shore those stitches up even more so that when the stitch column between them is dropped, the edges are secure. The setup was a little confusing but once you get going, the pattern is very easy (and very easy to memorize). I hope she will like it!

I got some really exciting news this morning. Carol of Carol E. Herman Designs and knit = joy has released her Passport Mitts pattern early! Check it out! She’s planning to host a KAL starting October 1:

When my mom was visiting, she asked for a pair of fingerless mitts. We looked through some patterns and she really liked this one, so I’m planning to make her a pair. I have had the best yarn picked out for it forever: Classic Elite Yarns Inca Alpaca in navy blue. I got it from the Goodwill windfall so I think that will be great karma for a gift for her. I’ve got to hurry up and get some other projects done so I can start these soon!

*Second sock syndrome: the often insurmountable inertia a knitter must overcome when faced with making an object identical to the one just completed.